An excited Hyacinth has put an advert in the local newspaper to teach people social etiquette, but the clientele proves far different than what she expected.

Caution To The Deliverymen[] 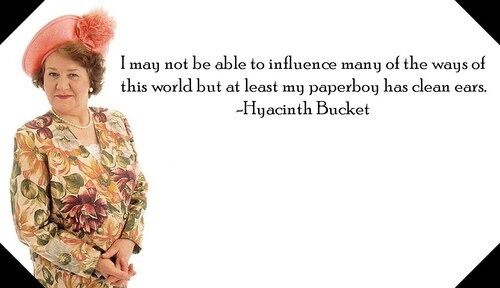 Daisy's recalling a time when Onslow ripped her pink dress off in a moment of passion.  Onslow, of course, doesn't remember the incident and believes it was another man.

Daisy (finally remembering): It was one of Rose's engagement parties!  Yeah!

Onslow:  Well, that doesn't narrow it down much!  Your Rose has had more engagement parties than I've had bags of crisps!

[a bit of other action.  Rose can't remember who she was engaged to when Daisy wore the pink dress]

Rose:  What was I wearing?

Onslow:  Well, it wouldn't be white, I can tell you that much."  [Rose smirks]

Community content is available under CC-BY-SA unless otherwise noted.
Advertisement