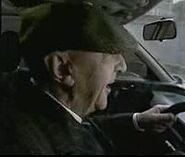 Add a photo to this gallery

"Daddy" is a fictional character from the British situation comedy Keeping Up Appearances, first broadcast in the 1990s. He is the father of the central character, the social-climbing snob Hyacinth Bucket, and one of the two actors who portrays him is George Webb. "Daddy" has four daughters: Hyacinth, Daisy, Violet and Rose. He lives under the care of Daisy, her slob of a husband Onslow, and the man-eating Rose in a run down council house.

Hyacinth's father is a senile old man and a Walt who frequently thinks World War II is still on and wandering out of the house to join the Foreign Legion, and enjoys dressing up in costumes and relishes in pinching the bottoms of strange women. He is referred to by Onslow as a "dirty old man" but to Hyacinth he is "just a touch senile in the nicest possible way".

His condition means he is unpredictable and behaves bizarrely. Sometimes he believes himself still to be a soldier in World War II, while at other time believes himself to be outrageous characters, such as the masked crime fighter "Captain Midnight." He occasionally indulges in a second childhood, once dressing up as a spaceman, he also enjoys playing with trains (as implied in series one). In the final episode of series two, the old man steals Richard's car, resulting in a car chase between Hyacinth's Daddy and Onslow, who the rest of the family, including Hyacinth, are in the car with. His dementia frequently causes him to unwittingly sabotage one of Hyacinth's social climbing endeavors.

Daddy occasionally, without any thought, proposes marriage to women at the over 60s club he attends and gets caught up in various relationships. In a series two episode, the man takes himself off to the register office to be married. When arriving he falls asleep. Frequently he goes missing, thus sending Hyacinth into a panic.

Daisy and company often turn to Hyacinth for help when their father is being problematic; however they occasionally prefer not to tell her, knowing "she'll go mad."

Daddy's irrational behaviour often causes Hyacinth embarrassment and is yet another threat to her attempts at impressing the upper-classes.

The character has very few lines, heard speaking in only a few episodes, and in some he is either sleeping or being shown in one of his costumes just muttering to himself. The character also isn't in many of the episodes, despite many of the plots involving him.

Despite his advanced age, he has been shown to still be very spry -- riding bicycles and even skateboarding.

Hyacinth: "I'd Have Daddy at the House Except That ..."Edit

(There are several others, add them when you find them)

Daddy wishes to be married, or other women wish to marry him. However, Daisy and Rose forbid it because of his senility.

Retrieved from "https://keepingupappearances.fandom.com/wiki/Daddy_Walton?oldid=5399"
Community content is available under CC-BY-SA unless otherwise noted.